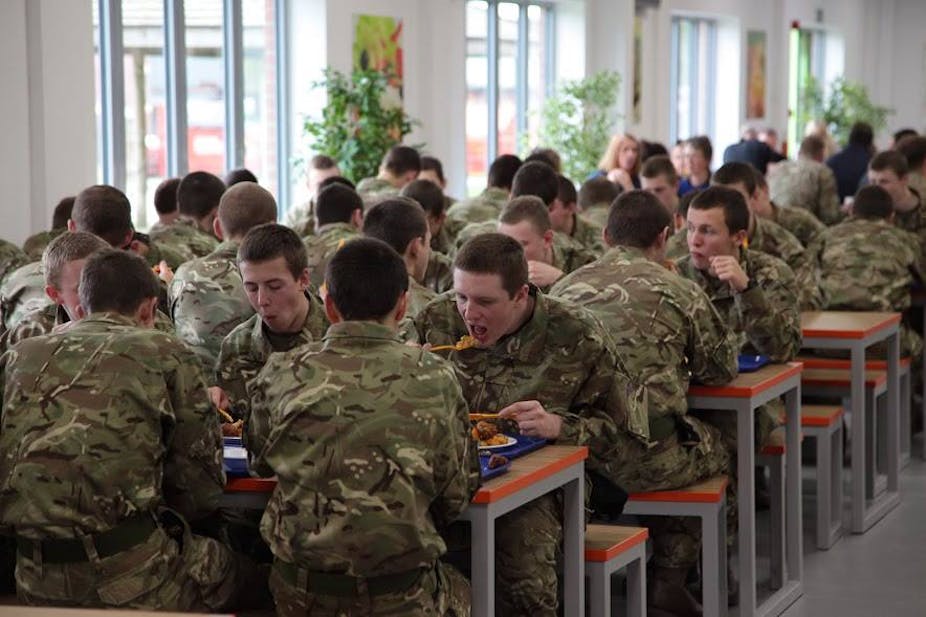 When you think of child soldiers, it might conjure up images of young children far away, taken from their homes and forced to take part in war and fighting, often held against their will.

It may surprise you then to learn the UK employs child soldiers – about 23% of army personnel were recruited before their 18th birthday. By recruiting 16-year-olds, the UK is an international outlier, an honour it shares with Iran, North Korea, and Zimbabwe. No other member of the EU or NATO, or permanent member of UN Security Council, recruits so young.

This policy has earned criticism from humanitarian organisations – including the UN Committee on the Rights of the Child. And the UK public seems to agree – nearly 80% think the age of enlistment should be at least 18.

And yet this is something the UK government arguably wants to see more of. A recently published government report on military recruitment, by the MP Mark Francois, warns of a serious staffing shortfall, especially in the army.

Given that the number of children signing up has declined over the last two decades, three of the report’s 20 recommendations implore the government to increase efforts to promote military service to young people.

This includes teaching children about the armed forces as part of the national curriculum and expanding cadet units in schools.

This all comes on top of the £90m pledged since 2012  for school projects that promote a “military ethos”.

Objections to child military recruitment typically focus on the physical hazards of the job. Since the majority of junior recruits are channelled into frontline infantry roles, they are at higher risk of becoming casualties during deployment. During the British campaign in Afghanistan, those who joined at 16 were roughly twice as likely to be killed or injured than those who signed up as adults. Rates of psychological trauma are also higher among younger recruits.

The mandatory educational training offered by the army is also extremely basic. Recruits are exempt from the 2008 Education and Skills Act – which requires all under-18s to participate in appropriate full-time education or training. And the “functional skills” qualifications offered by the military are far below the standards of GCSEs and A-Levels.

This provision is especially concerning given that many recruits have not had successful school careers. In 2015 the majority of entrants to the Army Foundation College were assessed as having a reading age of 11 or below, with some as low as five.

There are also worries that 15 and 16-year-olds lack the psychological maturity and full information required to genuinely consent to the terms of service. Questions have been raised as to whether junior recruits have the literacy skills needed to fully understand the enlistment documents they sign.

Kill or be killed

But as well as the risk of death and injury, I think we should pay attention to a less obvious risk that is imposed on these soldiers – and that is the moral risk of engaging in serious wrongdoing. As General Sir Michael Rose puts it:

No other group in society is required either to kill other human beings, or expressly sacrifice themselves for the nation.

Since committing unjustified homicide is a terrible stain on a person’s life – as well as a cause of psychological harm – we should worry about the risks of young people becoming killers. And not just the risk of being killed.

Philosophers have become increasingly interested in military ethics over the last two decades – with many arguing that killing in war should be subject to the same ethical standards as killing in other areas of life. An important implication of this view is that there is nothing morally special about war, and that fighting in unjustified wars typically involves grave moral wrongdoing.

If these philosophers are right, we should be especially concerned about the moral risks of military service, and the question of who in society should bear those risks.

The government report is correct that much more effort should be put into educating children about military service. But by doing so simply as part of a recruitment drive, we would be engaging in what my colleagues at The Oxford Institute for Ethics, Law and Armed Conflict Michael Robillard and Bradley J. Strawser (themselves veterans) call “moral exploitation”. This involves “unfairly offloading or outsourcing moral burdens onto those who are vulnerable”.

Instead, if we really are to prepare children for the risks of service they need proper ethical education, not just sanitised promotional materials that focus on “big guns” and “awesome armour”.