Distributing the Costs of Justified Disobedience: Extinction Rebellion, and Beyond 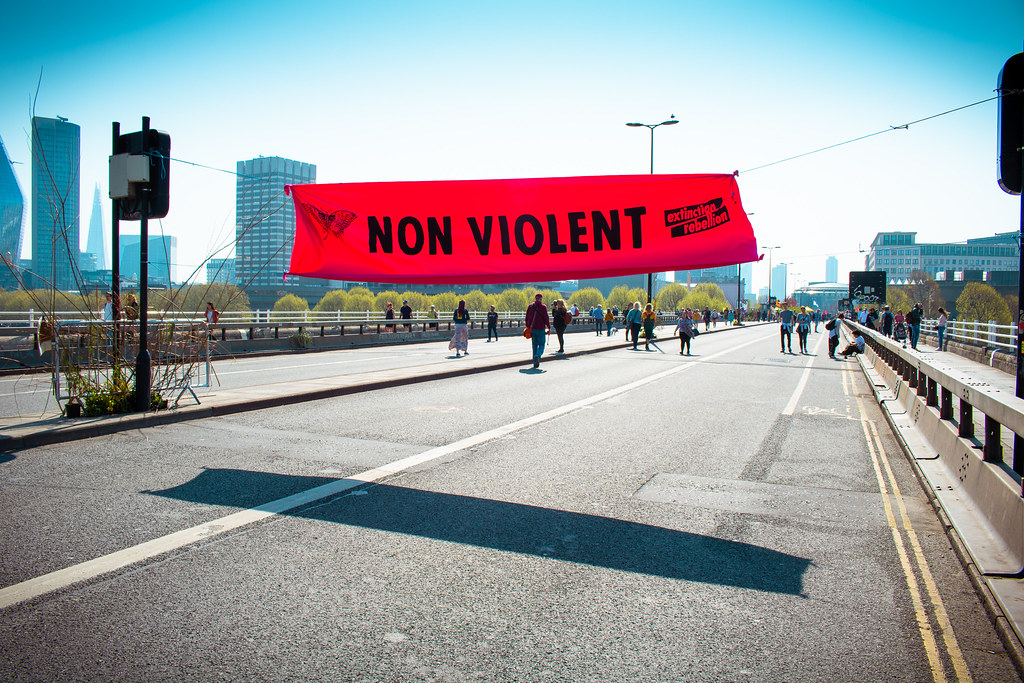 On 21 June 2019, several hundred activists occupied some of the busiest intersections in Adelaide, Brisbane, Canberra, and Melbourne, causing enough disruption to gain the attention of the media. The Extinction Rebellion Australia spokeswoman Miriam Robinson stated: “We needed a climate declaration yesterday, but our governments are not listening, which is why we have to get out in the streets to make ourselves heard…This might be disruptive for some people and we apologise for that, but if the climate runs out of control this kind of disruption will be nothing to what will come.” She further added that we have “run out of time to wait for the existing political process to work.” Since the initiation of Extinction Rebellion in the UK in 2018, similarly nonviolent protests and organizations with comparable goals have sprouted, according to Extinction Rebellion Global, in 67 countries.

While many people seem sympathetic to the movement’s goals — a recent survey revealed that 60% of Australians want immediate action on climate change, while only 7% support doing nothing at all — one may rightly wonder whether the actions of the Extinction Rebellion are morally acceptable. Even if we do not believe that the duty to obey the law is absolute, and that certain acts of civil disobedience — nonviolent illegal protests that seek to communicate to the government or society as a whole that something is seriously unjust — are among the few exceptions to the duty to obey, the costs the rebels impose on others seem problematic. Those whose commutes and everyday lives were disrupted by Extinction Rebellion’s actions haven’t consented to these costs, and we normally do not see it permissible to impose nontrivial inconvenience on others, unless there is very good justification. In the following, I argue that more radical (and even violent) activism that targets those responsible for the threat or injustice in question is sometimes preferable to the less radical, non-violent activism that imposes indiscriminate costs on the general public.

Does the imposition of nontrivial inconveniences on the general public transgress people’s rights? One way to argue that it doesn’t is to trace their responsibilities to the climate crisis. Most citizens of developed countries benefit from industries that contribute to the climate threat (e.g. by enjoying lower energy prices), and some even support those industries actively (e.g. by paying their energy bills and thus making such industries profitable). We might think that, in virtue of being (somewhat) responsible for the climate crisis, citizens of developed countries acquire a duty to do something about it. Since most citizens have done virtually nothing to fulfil this duty, it might not seem unfair that they bear the costs involved in activism needed to combat this crisis.

There are two difficulties for this approach. First, even if most citizens are somewhat responsible for the climate crisis, it is reckless just to assume the random person on the street is responsible enough to have no complaint against the imposition of such costs. One might reply, of course, that it is unfortunate that the few who are insufficiently responsible are bearing costs too, but their misfortune is nonetheless justified as the lesser evil compared to the climate crisis. How plausible this reply is depends greatly on the constituency of those who are actually affected, but if alternative means that avoid risking involving the innocent were available, the justifiability of actions that impose costs indiscriminately will be under pressure.

Second, responsibilities come in degrees. Even if we agree that ordinary citizens are somewhat responsible for the threat of climate change, they might nevertheless not be the most appropriate targets. We might doubt how much meaningful choice ordinary citizens have over their own consumption, especially when the range of options is determined by public policies that ordinary citizens have negligible influence over. In contrast, mining companies and other major corporations often enjoy significant political influence, and have much more of a say on environmental policies than ordinary citizens. They have also reaped most of the benefits of environmental exploits. Thus, we should be able to effortlessly pin down the more responsible parties. Insofar as we agree that appropriate cost imposition should trace degrees of responsibility, the more appropriate targets easily present themselves. 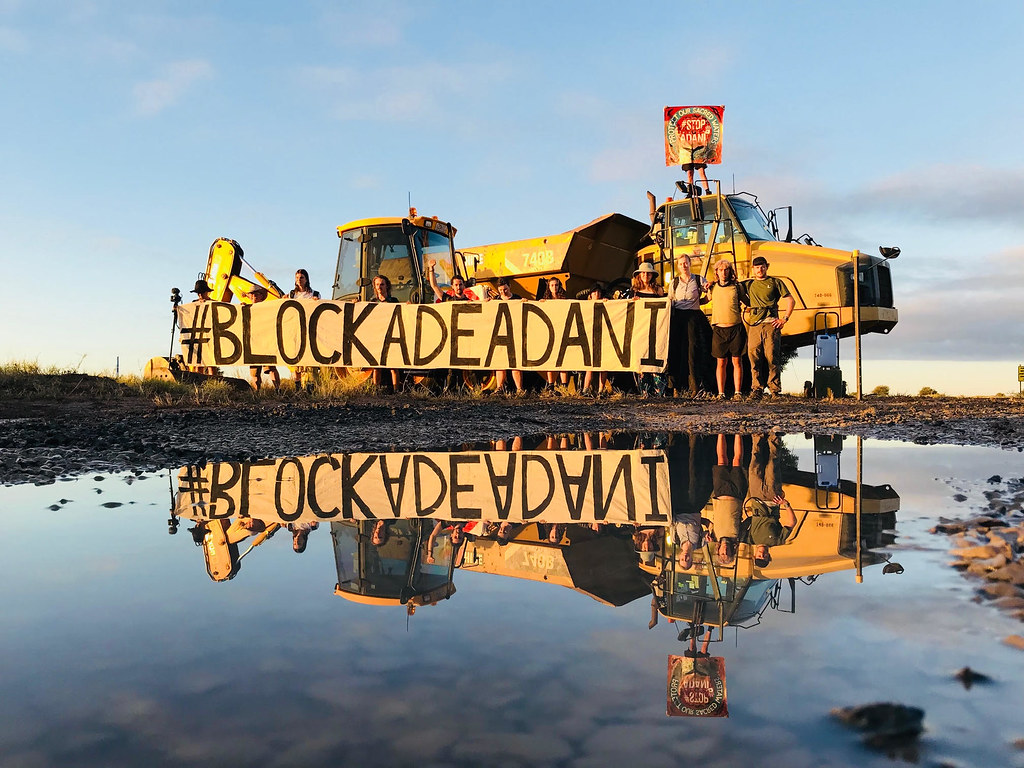 This is the strategy that environmental activists in Australia, e.g. participants of movements such as Stop Adani and members of organizations like the Frontline Action on Coal (and certainly other activists around the globe), have followed. They have directed their activism mainly against the exploiters and their business partners. For instance, environmental activists have engaged in “a series of…protests that stopped coal trains,” have locked themselves onto drill rigs to hinder mining operations, and have stopped land-clearing work by “suspending [the activists] themselves from poles.” In fact, targeted action is nothing new in environmental activism. Groups such as the Earth Liberation Front (ELF) have destroyed, among other things, “timber mills that disrupted sensitive ecosystems.”

To the extent that acts of targeted environmental activism, such as those mentioned in the above paragraph, draw attention to the movement through the theatricality and symbolism of their disruptive activities, and use that to communicate their demand so that the audience (be it the government or general public) can come to see reason, it promotes change in ways highly similar to groups like Extinction Rebellion. But unlike the activists of the Extinction Rebellion, those engaged in targeted activism do not achieve the relevant media coverage by imposing costs on the random person on the street. If anyone is being used as means to an end by these groups, it is the parties most responsible for the environmental threats, rather than those whose responsibilities are indirect or difficult to establish.

With regard to fairness, there is strong reason to favor such targeted activism over the indiscriminate civil disobedience groups like Extinction Rebellion engage in. When certain parties have deliberately exploited the legal system (or its underenforcement), and especially if they have exercised disproportionate influence over the system (or its enforcement) to make it exploitable, so that they can gain unfair advantages over others, it is fair that these parties relinquish the unfair benefits and repair the damage they have caused. When they refuse to do so, and when the severity and urgency of the problem at hand demand immediate action, it is fair to choose actions that impose costs on these parties rather than impose costs indiscriminately. And it would be unfair to impose the costs on parties that are not obviously responsible for the plight if it is possible to let these costs fall on those most responsible instead.

Targeted environmental activism, however, diverges from civil disobedience, traditionally understood, in a number of ways. Most notably, it might not be primarily communicative. While civil disobedience might also involve some coercive force, the coercion is employed for the sake of making communication more effective. In contrast, targeted environmental activism sometimes achieves its goal not by reasoning with others, but through direct interference with the environmentally unfriendly industries. For instance, Stop Adani has started to drive Adani’s potential business partners away, including forcing insurance companies to reconsider whether insuring Adani’s projects is profitable. Furthermore, groups such as the ELF have publicly endorsed violent acts of sabotage. Moreover, those engaged in targeted activism don’t always pre-announce their activism. They also sometimes refuse to reveal their identity, and thereby evade legal consequences. The above-mentioned features — the endorsement of coercion, violence, covertness, and the refusal to accept legal responsibilities — appear to be problematic. Civil disobedience steers clear of most if not all of these features, and therefore seems less problematic. Is targeted environmental activism nonetheless justifiable? 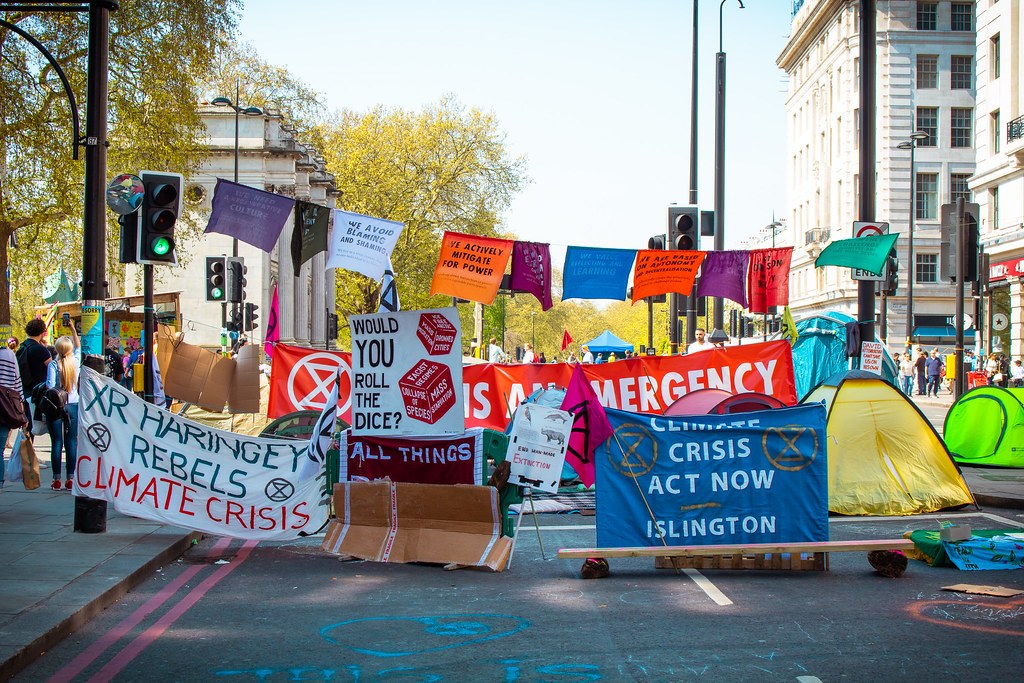 Some might worry about the fact that uncivil disobedients, including some environmental activists, do not express respect for law by refusing legal punishment, or about their use of coercion or even violence. However, these worries should hardly be real concerns. First, targeted environmental activism often faces harsh responses from governments. The ELF, for instance, has been branded a terrorist organization by the FBI, despite ELF’s strict guideline prohibiting harming persons and the fact that “no one has been injured from the group’s actions.” We can’t reasonably demand activists to submit themselves to a legal system that will treat them deeply unfairly. More importantly, while such acts might defy the law as it actually is, they respond and endorse that which justifies the law in the first place — the essential values of justice, fairness, respect, and the protection of others as well as ourselves. Finally, with regard to coercion and violence, insofar as the costs are imposed on those most responsible for the climate threat, targets have no legitimate complaint against these costs.

First, the personal costs of engaging in targeted environmental activism might be excessive, especially when the government will treat participants as terrorists. Second, and based more on strategic considerations, the Extinction Rebellion can work separately but in concert with targeted environmental activism. As Steve Vanderheiden keenly observes, when genuine radical and violent groups exist, moderate and nonviolent groups are more likely to be recognised and treated as moderate and nonviolent groups. The Extinction Rebellion can take advantage of this perception, and present itself as a reasonable interlocutor to the government and the general public.